Boarding a dog. For us that means integrating a new Family member. Getting used to each other, finding your spot on the couch. It means getting to know the dog on so many new levels and for the dog, meeting the rest of the Family. It is rewarding when now dogs, who stayed with us before, are already getting excited when I pull into the parking lot with them. Heading to the Gate, running along the dock, sometimes greeted from other Marina dogs. Finding our boat, getting up the ramp without hesitation and landing there paws with precision. Like they’ve never done anything else.

Lots of dogs who stay with us are the ones I walk. A certain trust level had been built with the dogs as well as, of course, there Mommy and Daddy. But it did not start out that way. The first dog we accommodated was Milo. 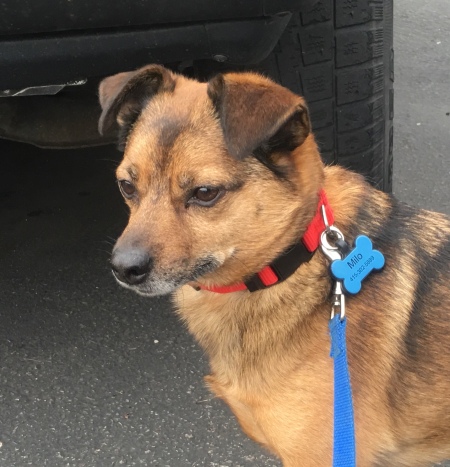 I had only met Milo briefly. I was taking care of his sister, a “CAT” a few times and now his owner was in an emergency situation and asked me, if we could watch him for the weekend. Milo had been staying in a kennel before and had an upset stomach a week after his stay. He is a sensitive guy and for cases like him, it’s better to have a more private surrounding. It was not only Milo who was nervous, I was a bit nervous as well, as I was told to not leave him unattended with my kid in one room.

Luckily all worries were without reason, our son is very respectful and listens and Milo is a sweet little guy. The first nights he checked into our bedroom a few times, like he was making sure, we are still there and he wasn’t alone.

Harriette was our Nr. 2, she had just turned one year old. A second being unwatched and she would chew up Mats toys. What puppies do. Harriette knows what she wants and is protesting very loud, if she does NOT get exactly that. When I decided to ignore her barking, after we had gone to bed where she wanted to be as well and my husband was just about to head to the couch, she took matters into her paws and managed to jump onto our mattress, curled up by our feet and did not move until the next morning. Impressive! Just to give you an idea, Harriette is small and our bed is quite tall. We had her for two days and it was a good introduction for all of us.

Dog Nr. 3 and now a common guest is our Coco. She is kinda like our “other dog” besides our own Noah. She is a sweetheart and is one of the few, who won’t give in, until she is sharing the bed. Oh, and she loves to give kisses.

We happened to have Coco over when we also had Family visiting from Canada and she snuggled up to them with joy. We even took her on a camping trip, with the Family from Canada and wrapped her into blankets by the fire and she changed spots from lap to lap and cuddled up with us on our rooftop tent. What an adventure for her and she took everything so well, as long as she does not have to be alone, she is just fine. A true people’s dog. She stayed with us for 10 days the first time. 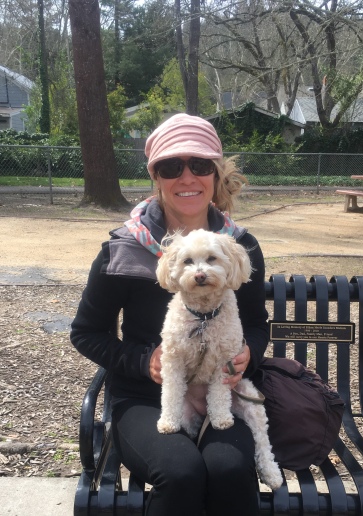 Our fourth guest was Cody and he also is visiting us every few months. He is a character and very attached to his Momma. He barked at me like crazy when I met him and has this habit of attacking the feet. It does not hurt, but he caught me by surprise. Cody needs to have “his person” around and should Momma not be there, he finds his next favorite. So, I became that person to him. At our place he would attack my husbands or my sons feet, should they get too close to me. He followed me around wherever I went. Cody is not one of the dogs I walk, he is a friend of Harriette and that’s how we were introduced. Sometimes I run into Cody and his Momma on the street and it is always a very heartwarming experience when he recognizes me. He certainly has our heart and he awakes my protection mechanism every time. TEAM CODY!

We all really like to have the dogs at home. Our own dog Noah likes his room upstairs, so it was nice having some snuggle buddies in the living area. After we had those four dogs with us a few times, we boarded Luna for ten days. Luna is a Border Collie and is one of my favorite dogs to walk. I only walk her ones a week, her owner talked to me at the post office after he noticed the “Dog Walking” stickers on my car. Luna is so well trained, I like to take her for a run, as she just stays by your side. She has been the biggest dog we boarded so far and we also matched her with another dog at our home for a few days, since she is so easy going. Since than we know, we are doing fine boarding two dogs.

One day the owner of Romy called me in distress. Romy wasn’t very cooperative to the friend, who was supposed to take care of him. We happily took him to us and he really fit right in and was snuggling up to everyone and had a great time. 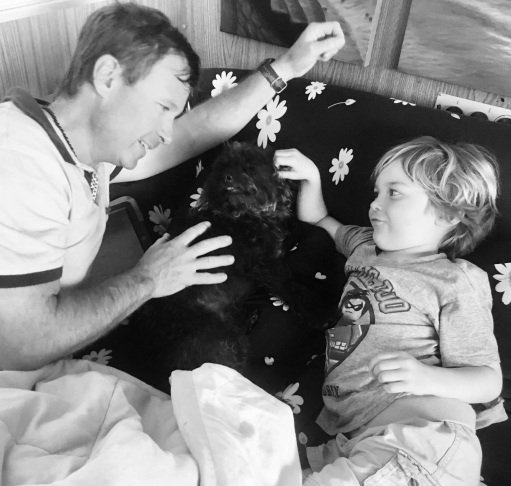 Oliver, the Labradoodle was another great guy, who we boarded at first and who than became a daily walk, as we had hit it off right away. He gets along with everyone and loves to get his fluffy white fur dirty whenever he finds a great spot to roll around in.

Monty came over for a weekend, an 11yr old Dachshund, who did not hesitate to walk aboard. He is a super friendly fellow and Mats was especially cute with him. 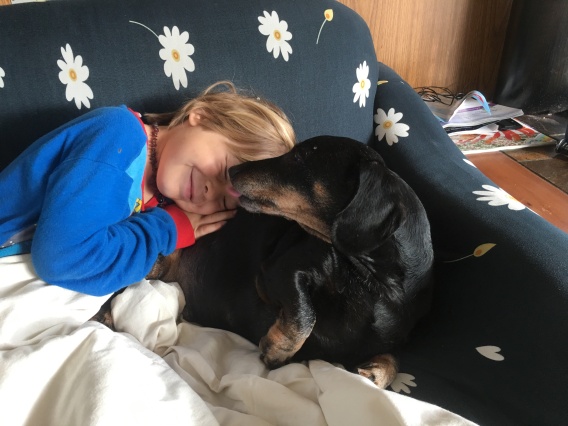 Do you think your dog would like to cuddle up on the couch with us? 😀

Monday - Thursday 8am - 5pm
Friday/Saturday/Sunday
upon request and availability